Home of the MacRay Yacht Club 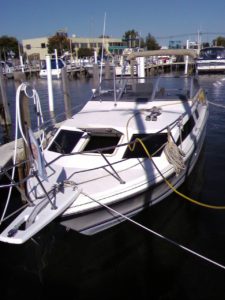 It was my first season boating in 2005 and I was the proud owner of a 24.5 ft Bayliner Ciera, bought sight unseen from Ebay. “Our Lady of Constant Vacation” or ‘Constance’ as we called her lived in a slip at Kean’s marina. There was talk around the marina of this annual lake event called ‘Jobbie Nooner’. Being brand new to the St. Clair boating community, this sounded interesting. So on Jobbie morning of 2005 a few of us rookies piled into the Constance and headed off to Gull Island.

After the initial shock of the event size wore off, it was time to find a spot to throw anchor.  We did so and immediately proceeded to drift away. So we moved to a different spot and threw anchor again, and drifted again. And again. In hindsight the anchor that came with the boat was probably purchased at a dollar store by the previous owners. This was our first lesson in anchoring…buy an anchor 1 or 2 sizes bigger than the manufacturer recommends. More anchoring rules here: http://sailmentor.com/6-most-common-anchoring-mistakes-keep-your-boat-off-the-beach/ 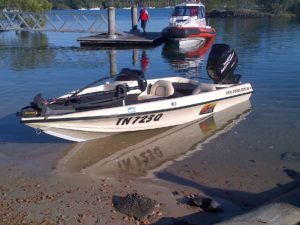 After many unsuccessful anchor attempts, we finally realized this was not meant to be. So, fairly exhausted from hauling and reeling (no windlass), we decided to beech the boat on a nearby island that I later learned is called Seaway Island…in Canada.

This was a welcome break. The crew piled out onto the beach, set up folding chairs and finally enjoyed some well earned beverages. We soon noticed we were not the only occupants of the island. There was a loud group of people down the beach around a campfire this sunny afternoon slurring things like ‘EH’ and ‘Molson’…we didn’t think much of it.

As the afternoon went on some of us decided to go swimming, looking out at beautiful lake St. Clair with Constance beached behind us. Several freighters passed by, as is bound to happen in the shipping lane of the St. Clair river. All was finally going splendidly on this beautiful day. Until…

Suddenly there was a somewhat worried summons from one of the crew who had just woken from a nap on the beach, “Pat…..I think we have a problem…” 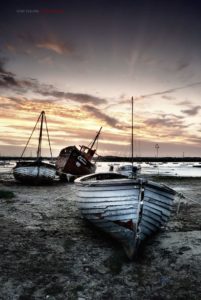 Looking to shore, much to my surprise, was my dear Constance, parallel to the waterline, fully on land, with no water within 5 feet of it. Apparently the wake from freighters is enough to turn a properly beached boat broadside to the water and wash it ashore. WAY ashore.

‘No problem’ we thought. We had been pulling this boat around all morning looking for a solid spot to anchor. How hard could this be?

As it turns out, it is very hard.

We pushed and pulled, bow and stern. No effect whatsoever. We were stranded on an island with a bunch of…wait a minute….

I don’t remember exactly how it happened, but beer was most certainly involved. We connected with the rowdy group of mild to severely intoxicated Canadians down the beach. Many of them came over to help us out. Even with so many people pushing that there was no room for any more helpers, the stern would not budge. BUT THE BOW MOVED! A few inches at first, then a few feet. Before long we had the bow pointing towards water and when freighters would cause a wake we were partially floating! During those times everyone would give a big push and after a few freighters we were finally afloat and free of land.

Needless to say, after this all gear was quickly tossed aboard, the engine was fired and the last of our crew was dragged aboard in haste. Because another freighter was coming.

MRYC members, your help is needed!

MRYC is looking for contributors for our blog. Your stories can be fun, lessons learned, safety tips, or anything related to MRYC, our surrounding community, and boating on the great lakes. Please provide at least one photo with your story, or we will choose one for you if you like. Your article will be posted to our website Blog page as well as linked to Facebook and Twitter for everyone’s enjoyment. Please send Blog submissions to info@macrayyachtclub.com.